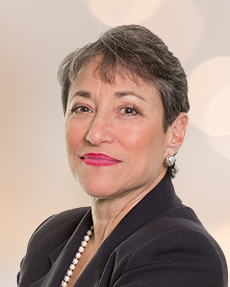 Andrea Smith is of Counsel at Silverman Thompson and focuses on criminal matters in the state courts in Maryland.

From March, 1981 to September, 1990, Ms. Smith served as an Assistant State's Attorney with the Office of the States's Attorney for Baltimore City, Maryland. During her first year as a Baltimore City prosecutor, she was located at the southeastern district of the Baltimore City Police Department prosecuting misdemeanors to include assaults, drug possessions, thefts, and motor vehicle violations. Ms. Smith spent the next two years in the Sex Offense Task Force investigating and prosecuting rape and child molestation cases. Between 1984 and 1990, Ms. Smith was assigned to the Narcotics Investigations Unit. Her responsibilities included a weekly docket of 40 to 60 felony possession and distribution cases, and participation in long term investigations involving undercover operations and wiretaps. During this time, several of these local investigations became federal cases, and Ms. Smith was sworn in as a Special Assistant United States Attorney in the District of Maryland to prosecute these cases in the federal court.

In September of 1990 Ms. Smith joined the Office of the United States Attorney for the District of Maryland as an Assistant United States Attorney. She was assigned to Narcotics Enforcement. In January, 1995, Ms. Smith was named Deputy Chief of the Violent Crimes and Narcotics Section, Asset Forfeiture Chief, and Director of the Organized Crime Drug Enforcement Task Forces (OCDETF) for the Mid-Atlantic Region of the United States. Except for a period between 1998 and 2001, Ms. Smith managed the OCDETF program for more than 20 years until she retired from the U.S. Attorney’s Office in September of 2016. As Director of the OCDETF program, she managed a multimillion dollar fund from the Department of Justice that provided overtime pay to state and local law enforcement who investigated multi-jurisdictional, complex narcotics and money laundering organizations in partnership with federal law enforcement agencies. The Mid-Atlantic Region included ten federal judicial districts in Pennsylvania, Delaware, the District of Columbia, Maryland, Virginia, and West Virginia. Her responsibilities included chairing bi-weekly meetings with her regional counterparts from the FBI, DEA, IRS, ATF, Homeland Security, U.S. Marshals, and U.S. Postal Inspection Service. This committee was responsible for approving the initiation of cases, reviewing their progress, quashing inter-agency disputes, and managing the overtime fund. Her responsibilities included liaison work with the other eight regional directors across the country, the Department of Justice, and law enforcement agency chiefs.