Silverman Thompson partner Andrew White is a former Assistant United States Attorney who served as a Senior Litigation Advisor to the Clinton Independent Counsel in the Monica Lewinsky investigation. Mr. White has over 25 years of experience trying civil and criminal cases of all kinds. He has coordinated hundreds of complex federal criminal investigations and has tried over 400 state and federal criminal trials, including over 30 federal jury trials.

Mr. White represented numerous corporations and individuals in all types of civil cases in state and federal courts including patent infringement, fraud, breach of contract, interference with contract, enforcement and defense of employment and mediation agreements, and election law. He has defended interstate trucking companies in proceedings before the Federal Highway Safety Commission as well as individuals charged with violations before the U.S. Commodity Futures Trading Commission. In one significant case, Mr. White was named by the U.S. Department of Justice as lead counsel defending an F.B.I. agent in a multi-million dollar civil rights lawsuit in U.S. District Court. Most recently, he represented a multi-billion dollar casino and entertainment company in a proceeding in State court to block a local referendum on a zoning law for a casino.

Mr. White is often called upon to handle very unique and complicated cases. For example, he recently won a major victory in United States District Court in Atlanta in a case where he convinced the Court to invoke rarely-used federal laws to block a pending State court prosecution of his client.

Prior to joining Silverman Thompson, Mr. White served as an Assistant United States Attorney with the United States Attorney’s Office for the District of Maryland for almost ten years. During his tenure as a federal prosecutor, Mr. White handled a wide variety of prosecutions including white-collar, narcotics, money laundering, violent crimes, and Internet crimes. He received numerous awards for his work as a prosecutor.

Mr. White was the first federal prosecutor in the United States to use federal conspiracy, false statement and obstruction laws against trucking companies and executives for the falsification of truck driver’s logs to mask violations of federal highway safety laws. He received an award from a national public interest group for this investigation and prosecution.

Mr. White also served as a private legal consultant and adviser to Independent Counsel Robert Ray in the investigation and prosecution of President William J. Clinton. As a consultant in the Whitewater and Lewinsky matters, Mr. White helped to coordinate the grand jury investigation of the President and worked with the Independent Counsel to prepare the case for trial.

Mr. White is a 1981 graduate of the University of Vermont. He graduated from Syracuse University College of Law in 1985 and served as an editor on the Syracuse Law Review. He also served on active duty for three years in the United States Navy and served as a judicial law clerk to the judges on the U.S. Navy-Marine Corps Court of Criminal Appeals. He left military service as a Lieutenant Commander. 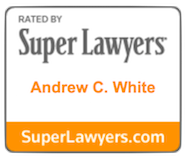