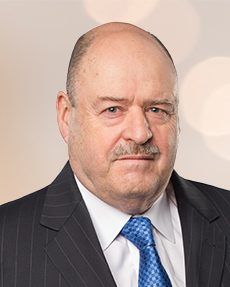 Andrew Norman is Of Counsel to the firm. Since joining Silverman Thompson, Mr. Norman has concentrated on the defense of clients in criminal matters. He represents clients in federal court and the various courts of the state of Maryland.

Professional History
Mr. Norman has over thirty years of experience as a federal and state prosecutor. He served as an Assistant States Attorney for Washington County, Maryland, for nearly five years. During that time Mr. Norman prosecuted thousands of defendants at the district, juvenile, and circuit court levels. Among the matters he handled were several high profile murders including the strangulation of a Washington County man in which the jury found the defendant guilty of first-degree murder despite a ruling by the Maryland Medical Examiner’s Office that the victim had died of natural causes.

While in the Washington County State's Attorney's office, Mr. Norman’s practice focused increasingly on major narcotics cases. At his urging, in 1986, in response to a burgeoning crack cocaine problem in Western Maryland, Washington County launched its own Narcotics Task Force (NTF) which consisted of officers from the Hagerstown Police and Washington County Sheriff’s Departments -- Mr. Norman was appointed the NTF’s first prosecutor. The NTF, which is still in operation, has since expanded to include law enforcement officers from the Maryland State Police and the United States Drug Enforcement Administration.

In 1987, Mr. Norman was hired by the U.S. Attorney’s Office as an Assistant U.S Attorney (AUSA) assigned to the Organized Crime Drug Enforcement Task Force (OCDETF) Mid-Atlantic Region. In March 1989, one of his cases was selected by Attorney General Richard Thornburgh in his annual report to then President George H.W. Bush to exemplify the success of the OCDETF program which had been instituted during the administration of former President Ronald Reagan. One of the many defendants charged with narcotics violations prosecuted by Mr. Norman during his term as an OCDETF AUSA, was a former Miami police officer who was convicted by a jury of maintaining a continuing criminal enterprise responsible for the importation and distribution of hundreds of kilograms of cocaine, much of which found its way to the District of Maryland.

In 1990, Mr. Norman was assigned to be Coordinator of the Financial Crimes Task Force (FCTF) for the District of Maryland. In this capacity, he worked with law enforcement officers from the IRS, the FBI, U.S. Customs and other federal agencies that monitored suspicious bank transactions, money laundering and structuring of bank deposits to avoid federal reporting requirements. Notable among the matters he handled as FCTF coordinator was the investigation which led to the conviction of a corporate executive employed by the British subsidiary of a Maryland corporation who defrauded his parent company of approximately $2.7 million by means of a bogus invoicing scheme utilizing shell corporations in the Isle of Man, the Channel Islands and the Cayman Islands.

In the mid-90s, with the advent of the Internet, Mr. Norman was assigned to investigate and prosecute child exploitation cases in which defendants were charged with numerous federal offenses including possession, receiving, distribution and production of child pornography. In 2003, Mr. Norman joined forces with the well-known TV show America’s Most Wanted (AMW) which aired on one of its weekly shows suitably edited photographs of an unidentified suspect who had uploaded to the Internet images of himself molesting a minor. The suspect was identified by an AMW viewer who recognized his face in the televised pictures. The suspect later cooperated, pleaded guilty, and testified against another individual who had been involved in an even more widespread scheme to produce and distribute child pornography. That suspect, a previously convicted child molester, after being convicted by a federal jury in the District of Maryland, received the first federal life without parole sentence in the United States resulting from conviction of a child exploitation offense. That case, United States v. James Reigle, is the subject of an entire chapter in Julian Sher’s book Caught in the Web (Carroll & Graf 2007).

In 2006, at the height of the Iraq War, Mr. Norman volunteered to serve the United States Department of Justice as a Resident Legal Advisor in Tikrit, Salah ad Din Province, Iraq (the home province of Saddam Hussein). In this capacity, he served as a mentor to the Iraqi judiciary and led the initiative to establish a special court for the investigation and prosecution of defendants charged with acts of terrorism. The special tribunal, known as the “Major Crimes Court” was established in September 2007 and in 2014 was still in operation despite the turbulent state of affairs in Iraq. While serving his 15 month tour in Iraq, Mr. Norman also brokered an international cooperation agreement between the University of Tikrit and the University of Baltimore. In 2012, two Iraqi professors from the University of Tikrit attended the University of Baltimore to conduct research on behalf of their University.

In 2008, Mr. Norman was selected by the U.S. Department of Justice’s Office of Overseas Prosecutorial Development, Assistance & Training to run its Iraq Program. He carried out this duty for 3 years. As Iraq Program Manager, he supervised all of the DOJ’s Attorney-Resident Legal Advisors who were deployed to Iraq to work with the Iraqi judiciary to promote the Rule of Law in the wake of the 2003 invasion. During his tenure as DOJ Iraq Program Manager, Mr. Norman supervised 10 DOJ attorneys deployed to various Iraqi Provinces. In May of 2010, Mr. Norman again volunteered to work in Iraq and was deployed to Ninewa Province where he served as interim Resident Legal Advisor for a 4 month tour.

In 2011, Mr. Norman returned to the U.S. Attorney’s Office in Maryland where he joined the Civil Section. As a Civil AUSA, he defended the United States and its various agencies in lawsuits involving matters such as medical malpractice and personal injury brought under the Federal Torts Claims Act, employment discrimination in violation of Title VII and the and the Administrative Procedure Act.